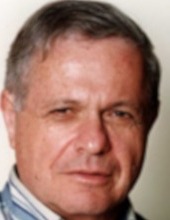 Molecular regulation of plant response to drought and salinity:

The molecular basis of abiotic stress tolerance in plants, especially drought, salinity and extreme temperatures, is rather limited. In view the worldwide devastating problems of salinization and desertification, both in relation to food production and to environment degradation, we are involved in several research projects directed at elucidating some of the molecular regulation of tolerance to abiotic stress, especially drought and salinity. Poplar trees, Arabidopsis, tomato and the model halophyte Thellungiella halophila are the major plants studied.  Plant adaptation to environmental stresses is controlled by cascades of molecular networks which activate stress-responsive mechanisms to re-establish homeostasis and protect damaged proteins and membranes. Stress-associated proteins and metabolites are two major key regulators of adaptation to abiotic stress which are intensively studied in our laboratory.

While the study of stress proteins and proteomics has already received considerable attention, our understanding of the contribution of the metabolome to stress tolerance is just emerging. Below is a summary of our recent findings on two unique stress-associated related proteins, Populus SP1 and Arabidopsis AtSP, and on stress-associated metabolite profiling. The research is carried out with 4 different plant species (Populus euphratica, tomato, Arabidopsis thaliana and Thellungiella halophila/salsuginea) and under different salt stress regimes.

Recently, we characterized a new exceptionally stable, homo-oligomeric protein (SP1), having a potent chaperone-like activity. The SP1 represents a novel class of proteins with a dual role: both in plant stress tolerance, and as novel nanobiomolecule for biotechnological applications. SP1 protein was isolated and characterized initially in Populus tremula L. The sp1 gene encodes a 12.4 kDa novel boiling-stable hydrophilic protein (SP1). Northern blot analysis revealed that sp-1encodes a small mRNA (about 0.6 kb), which is constitutively expressed in plants, but its accumulation is stimulated by stress conditions. In planta, SP1 is found at several sizes, and detailed protein analysis established that SP1 is a homo-oligomeric protein, existing in aspen plants as a complex composed of several 12.4 kDa subunits. Recombinant SP1 retained similar characteristics when expressed in E. coli.Two genomic sp1 related sequences that are highly homologous were isolated, as well as the corresponding promoters. The SP1 is exceptionally resistant to many harsh conditions, which normally degrade proteins. SP-1 transcripts were over-expressed in transgenic aspen, showing an increased tolerance to high levels of NaCl. In vitro, SP-1 is highly potent in protecting the activity of several diagnostic and industrial enzymes from heat-inactivation, and can serve as a nanomolecule for drug delivery. Proteins with similar characteristics have been found in several other plant species and homologous genes and proteins were found in Populus euphratica, an extremely salt tolerant species, as well as in Arabidopsis. We established that P. euphratica trees can maintain cellular homeostasis and show unique adaptation and tolerance to salt stress by the activation of different unique mechanisms. The following characteristics seem especially important: (1) the ability to tolerate high levels of Na+, Cl- and Ca2+ in the leaves, (2) a capacity to up-regulate the synthesis of different inorganic and organic acids (such as phosphoric acid and quinic acid), thus maintaining normal cell functioning, (3) maintainance of leaf cell turgor by the synthesis of high concentrations of mono and oligosaccharides (osmolytes), (4) P. euphratica trees developed, during their evolutionary adaptation to salt, a higher basal level of SP1 (relative to P. tremula, a salt sensitive species), and (5) SP1 is sumoylated upon salt stress, and is consequently translocated from the cytosol to the plasmalemma (possibly contributing to membrane stabilization and functioning) and to the nucleus (possibly associated to the chromatin).

Following cloning of Atsp, the Arabidopsis SP1 homolog, we showed its thermostability and resistance to protease, as well as its chaperon-like activity in vitro. To better understand the biologic functions of Atsp, we use a strategy of reverse genetics, transforming A. thaliana plants with an RNAi vector resulting in several independent knock-out lines showing no apparent AtSP protein accumulation. Preliminary results show that growth of the RNAi line is considerably reduced, and the under-expressing line is more sensitive to salt stress. In addition, we found that expression of the bacterial beta gene in tomato results in glycine betaine in the transgenic tomato (unlike the wild type which does not accumulate glycine betaine) and in increased salt stress tolerance. This was accompanied by changes in metabolite profiles and in the expression of HSP70. We propose that overproduced glycine betaine in tomato acts as an osmoprotectant to stabilize functional and/or structural proteins and in signaling changes in several metabolites.  An integrated physiological and metabolic characterization of salt cress (Thellungiella halophila)adaptation to high salinity stress was carried out, and compared with that of A. thaliana. We found that salt stress tolerance of Thellungiella is achieved by a combination of Na+ and Cl-uptake by the roots, and even those levels of Na+ and Cl- that accumulate in the leaves have no effect on plant growth and protein levels, being probably sequestered in the vacuole. Significantly high basal levels of several metabolites were found in Thellungiella, relative to the low levels found in Arabidopsis. 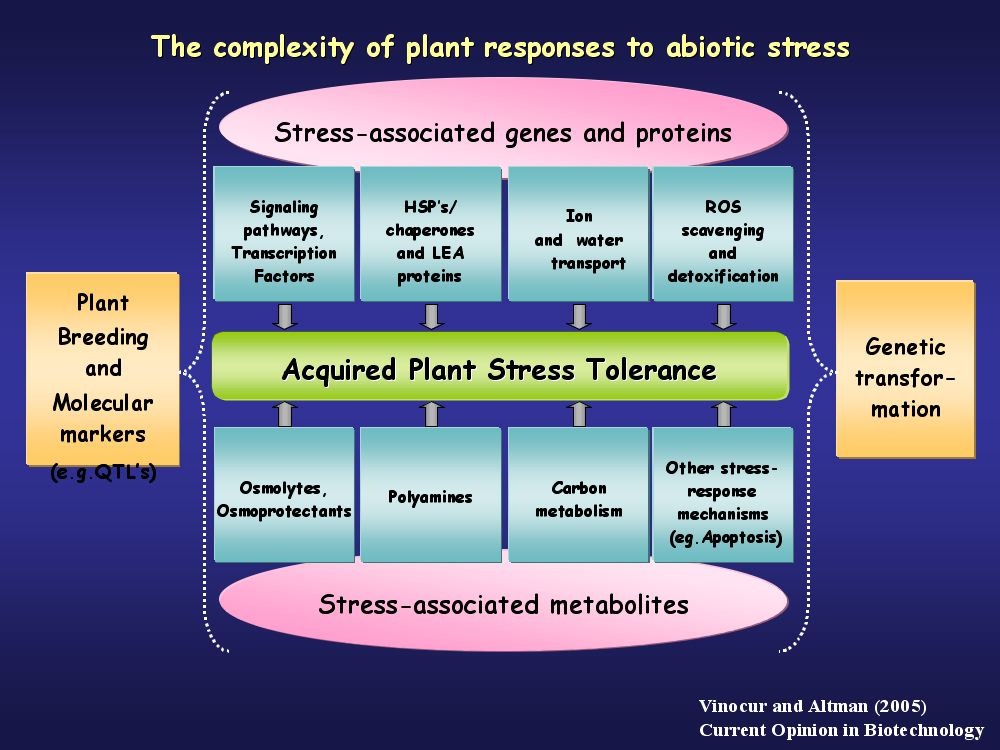 Forests are very important both to the world economy, having a wide range of commercial uses, and for maintaining and preserving our ecosystem. To lower the pressure on existing forests, an intensive effort is needed to include trees in the modern era of biotechnology. Although molecular breeding is routine in agriculture, forest-tree species have been left far behind. The potential of biotechnology for accelerating forest-tree-breeding programs can be realized at several levels, including clonal propagation of superior genotypes, and direct introduction of specific traits via genetic engineering. These two aspects are being studied in our laboratory. We developed efficient procedures for micropropagation of Populus species, especially P. tremula and P. euphratica, using shoot bud regeneration form stem and root explants, from callus, and in liquid cultures of roots. A large number of buds were produced from mature cotyledon explants ofPinus halepensis, and plants were recovered. Similar procedures were used for cloning of Fagus sylvatica. Highly efficient transformation rates, using A. rhizogenes and A. tumefaciens, were achieved in P. tremula. Using these procedures and several A. rhizogenes rol genes, we have recovered transgenic plants with improved growth rate in vitro, as well as improved rooting characteristics and stem:root production index. Tolerance to drought and salinity stress is being investigated in Populus tremula, Populus euphratica and Pinus halepensis (see above).

Clonal propagation of agricultural plants is becoming increasingly important, not only (as it was traditionally) in ornamental plants, but also in several other crops, including vegetables and trees. Our laboratory has been and is involved in studying hormonal and environmental control of embryogenesis, organogenesis and tissue development in culture. This resulted in the application of vitro procedures for rapid clonal propagation (as well as for physiological and molecular studies) of poplar species, Citrus, pine and Fagus, celery, Allium and several other species.

Gene-Culture Coevolution and Niche Construction in Plants and Agriculture

Niche construction and Gene-culture coevolution (GCC) are two major interrelated concepts that are currently the focus of revealing the interactions between human culture, their biological development and the human environment. The two are generally considered with respect to human development, and only occasionly to other organisms. Niche construction studies the processes by which an organism alters its own and other species' environment, and can be important to evolution as natural selection is. GCC claims that human development is the product of two interacting evolutionary processes: genetic evolution and cultural evolution. We expand the two concepts beyond the dual system of human gene-culture, to include also animals, plants and microorganisms' genes (the "biome"), with special reference to domesticated plants and agriculture. The interrelationship between human beings and agriculture in general, and plants in particular, is a central cultural cornerstone in two outstanding periods: first during the agricultural (Neolithic) revolution around 8,000-10,000 B.C., the other one in our time, starting with the molecular revolution in the mid 1980's. The two periods form major revolutions at the intercept between cultures on one side, and agriculture and plants on the other. We propose that domestication and all breeding technologies of crop plants and farm animals, both traditional and novel molecular technologies, represent a specific case of culture-driven genetic changes. While gene-culture coevolution is typically conceived as culturally-driven changes in human genes, we extend it to include also genetic changes in domesticated plants and animals.